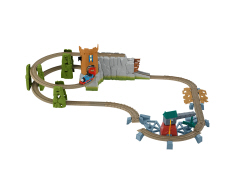 Thomas is being sent on a quest for the missing King's Crown in and around the crumbling castle grounds! With 5 exciting close calls, Thomas will need to power through the old walls that block his way, make it over the missing track, climb to the top near the castle turret and finally reach...a DEAD END!

In a final close call, Thomas drops into the abandoned mine where he has found the king’s long-lost crown!