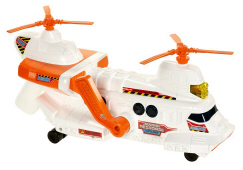 Matchbox® Mega Power Shift™ Assortment:
Lights and sounds get bigger and brighter with this assortment that adds a Power Shift™ innovation. Each large-scale vehicle has an easy-to-use feature, such as a lever, that creates specific movements, lights and sounds when pushed or pulled. Push one way and watch the helicopter spin its propellers; pull in the other direction and release its grappling hook. Vehicles include a rescue helicopter, fire truck and garbage truck. All of the vehicles are equipped for maximum adventure! Ages 3 and older. W7084 Assortment.