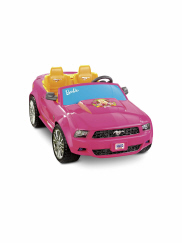 The Ford Mustang is a 2 seat, 12V BPRO. The new re-stage brings a significant new front end with fresh styling cues taken from the current Shelby cars and the 2005 GTR.

The re-stage also includes new rims, spoiler along with other changes and updates.

Attention to all of the details make this BPRO seem more like the real thing - realistic styling, premium interior details and chrome badges are all included.

The Barbie Mustang Power-Wheels has a sound box with three pre-recorded songs being two boy and one girl themed tune.

Lights flash and blink on the sound box when the music button and/or the horn button are pressed.

Other details include adjustable bench style seat and one cup holder.

This vehicle drives two speeds well on hard surfaces at 2.5 and 5 mph forward and 2.5mph in reverse.

This vehicle can be used on both hard and grass surfaces. New colors and graphics taken from the most vehicle relevant Barbie Style Guide is used to insure that this product delivers on all licensed accounts.