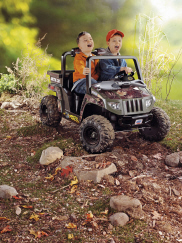 The Power Wheels Arctic Cat is a 2 seat, 12v BPRO with Ultimate Terrain Traction and is now available in a Camo version. The vehicle drives 2.5 and 5mph forward and 2.5 mph in reverse. It's main feature is UTT which delivers superior terrain performance versus other BPROs. It has a rear storage bed with working tailgate, glove box, under hood storage, vacu-metalized headlights, seat belts and a shovel for added fun.