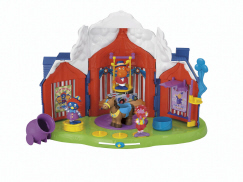 The Bobblin' Big Top delivers music, surprises, and bobblin' movement!  It starts as the backyard from the start of every Backyardigans episode and plays the theme song.  But, like the show, the backyard transforms.  With the press of a button, the house rotates to expose a full circus tent.  The top of the tent pops up and 3 rings pop out.  And of course, there are performers:  bobblin' Master of Ceremonies Tyrone, bobblin' High Diver Pablo, and bobblin Clown Uniqua.  Each has a bobblin' feature that gives them movement like on the show.  They can bobble up with baloons, dive off the high dive, shoot from the cannon, and bobble along the trapeze.  Or, bobble along to Backyardigans music!  Place the Bobblers on the hotspots, pull the lever, and they'll dance along to Backyardigans music.