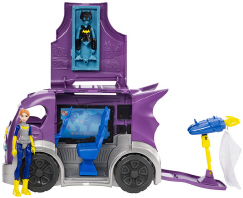 Batgirl™ action figure is ready to ride into action with her headquarters on wheels! With so many cool features and gadgets, this transforming vehicle showcases the tech genius' skills and abilities. When a mission comes in, Batgirl™ action figure can hop into the driver's seat and take off in the van. Its wheels roll, and its design is signature Batgirl™ -- cool purple with blue accents and a yellow bat-shaped symbol on the side. When it's time to set up headquarters, park, flip down the back and open the side up to set up two stories of mission fun. The driver's seat becomes a cockpit that can swing around to face the passenger seat for a two-person briefing before the information screens (other action figures sold separately). The roof hides mission gear for Batgirl™ action figure that includes body armor, gauntlets, a bat-shaped mask and bat-shaped wings -- simply snap the pieces on over her signature Super Hero suit to head into adventure. And the back reveals a net launcher, perfect for nabbing your villain! Simply load the net projectile and push the button to launch. Then close up and roll on to the next mission to play out all kinds of adventures and unleash your inner hero. Includes Batgirl™ action figure and transforming vehicle with second outfit and net launcher. Colors and decorations may vary.

Get ready to ride into action with Batgirl™ action figure and her headquarters on wheels!

The cool van opens to reveal a two-story mission headquarters with hidden mission gear for Batgirl™ action figure and a secret net launcher!

Simply lift up the side and flip down the back to transform from a rolling vehicle into a stationary play set!

The driver’s seat becomes a cockpit and swivels to face the passenger seat for two-person briefings in front of the information displays (other action figures sold separately).

The back holds the net launcher. Load the net projectile and push the button to capture your villain!

Fold up and ride to the next adventure -- the vehicle is ultra-cool with its rolling wheels, purple and blue color scheme and yellow bat-shaped symbol. Recreate scenes from the series or let your imagination ride into new Super Hero adventures and find your own inner hero!