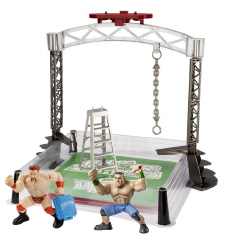 Power up a Money in the Bank match with this play set and WWE Power Slammers figures! Watch the WWE Superstars act like destructive wrecking balls as they fight to be the first to grab the briefcase at the top of the ring structure. The play set features a "match start module" on which figures can be set up before the match begins. Boys simply crank up their Power Slammers figures, hook them together and balance them on the module. Once the button is pressed, the figures will start wrestling — for real! Watch as they struggle to be the one to come out on top. Move the "match start module" to customize the action: place it on top of the turnbuckles to amp up the mayhem, move it to the top of the structure to create high-flying chaos or attach a figure to the rope instead of the briefcase to swing around the ring and take out everything in site! Who will be the first to claim the briefcase? Who will hang his head in defeat? Who will be ready to go again?