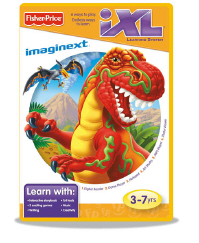 
Come join the dinosaurs on a pre-historic adventure. In the world of Imaginext, anything is possible! The Dinosaurs software CD features six applications: 1 storybook, 3 games with levels, Notepad with licensed stationary, Music Player with a custom interface, Art Studio with Dinosaurs backgrounds and stampers, and a Photo Album with Dinosaurs screen transitions.