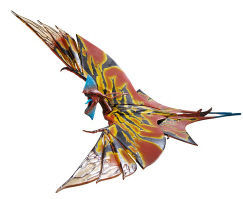 
AVATAR Na’vi Leonopteryx Figure: The fiercest and most feared Na’vi creature in all of Pandora comes swooping in, claws poised with an impressive 20-inch wingspan, several points of articulation and the ability to carry any basic Avatar figure on its back. Includes a display stand and an exclusive i-Tag to bring the Leonopteryx to 3-D life. Illustrated movie box