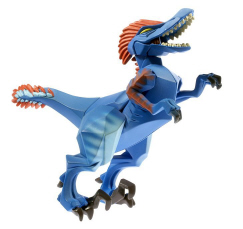 
Evil Megavores™ are taking over the world! It's up to you to stop them with Xtractaurs™ – the dinosaur figures that unlock exciting battles online! These articulated, aggressively styled 5” dinosaurs are more than just awesome figures – kids can extract each figure's unique DNA with the Extraction Gun in the Starter Kit (sold separately) and unlock a world of online play! Each figure unlocks 25 strands of virtual DNA, a secret attack unique to that species, and new game content at www.xtractaurs.com. Assortment includes 15 real-world species in five different clans of dinosaurs: Tyrannosaurs, Raptors, Stegosaurs, Ceratopsids, and Pterosaurs. Collect all 15 dinosaurs to create thousands of DNA combinations! Extract, Combine, & Fight Online™ with Xtractaurs™!

As of January 2012 the online features of Xtractaurs™ are no longer being supported. We understand that Xtractaurs™ has been enjoyed by many for the past several years, and we apologize for any disappointment this may cause.