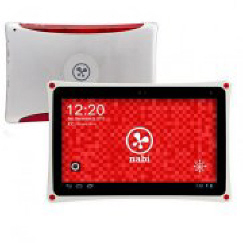 
The nabi XD 16GB Multi-Touch 10.1" Tablet features an Android 4.1 Jelly Bean operating system and a 10.1" capacitive multi-touch display with a 1366 x 768 native resolution. It's highlighted by an ergonomic design. The tablet is equipped with a 1.6GHz quad-core NVIDIA Tegra 3 mobile processor with a fifth battery-saver core and 1GB of RAM. Plus, for storing your child's favorite apps and media, the tablet has 16GB of flash storage, but can be expanded up to 32GB via the microSD card slot. There is also a front two-megapixel camera and a rear five-megapixel camera. The nabi XD tablet features 802.11b/g/n Wi-Fi wireless connectivity for connecting to the Internet in order to download software updates, sync via nabi Sync, retrieve files via nabi Cloud and more. There's a nabi connector that can connect to your computer via the included nabi connector to USB cable.