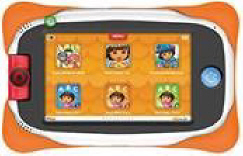 
Like your tablet and smartphone, it's fast. It has Wi-Fi, Bluetooth, a high-resolution capacitive touch screen, Android apps, expandable memory and a rechargeable battery for hours of fun. But it's not yours...it was built for your little genius! It was built to last with its drop-safe bumper. It was built to be safe with hundreds of features to ensure you're always in control. It was built for learning with its exclusive learning system - Wings™.