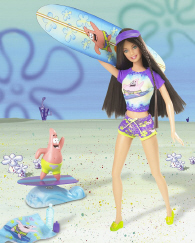 
Barbie® doll and her friends SpongeBob™ and Patrick™ spend their time having fun under the sea! Barbie® doll is dressed in cool surf themed clothes looking cool as ever. She is the trendiest character in Bikini Bottom™ and she loves all the sea creatures from the hit TV show, SpongeBob SquarePants™.