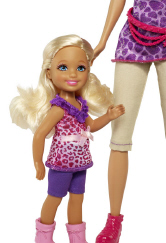 
The only thing that beats an exciting safari is having your sister share the adventure with you! And the only thing that beats that is making a new animal friend together! This two-pack celebrates that excitement and sisterly bond. Join Skipper® and Chelsea® dolls - along with their new zebra pal - as they get 'wild'! Dressed in adventuresome animal looks of their own, these sisters are as likely to get as much attention on safari as the 'mane' attractions. Skipper® and Chelsea® dolls wear animal print outfits of pink and purple. Skipper® doll's shorts are knee-length khaki, while Chelsea® doll wears purple shorts that match her shirt's ruffled collar. Both wear colorful boots that will let them trudge through mud or high grass in style. The adorable zebra is designed with a bobble-head for a touch of realism and fun. Skipper® doll wears a camera around her neck to let them 'shoot' animals in the jungle. Includes two dolls, bobble-head zebra figure and camera. Dolls cannot stand alone. Ages 3 and older.